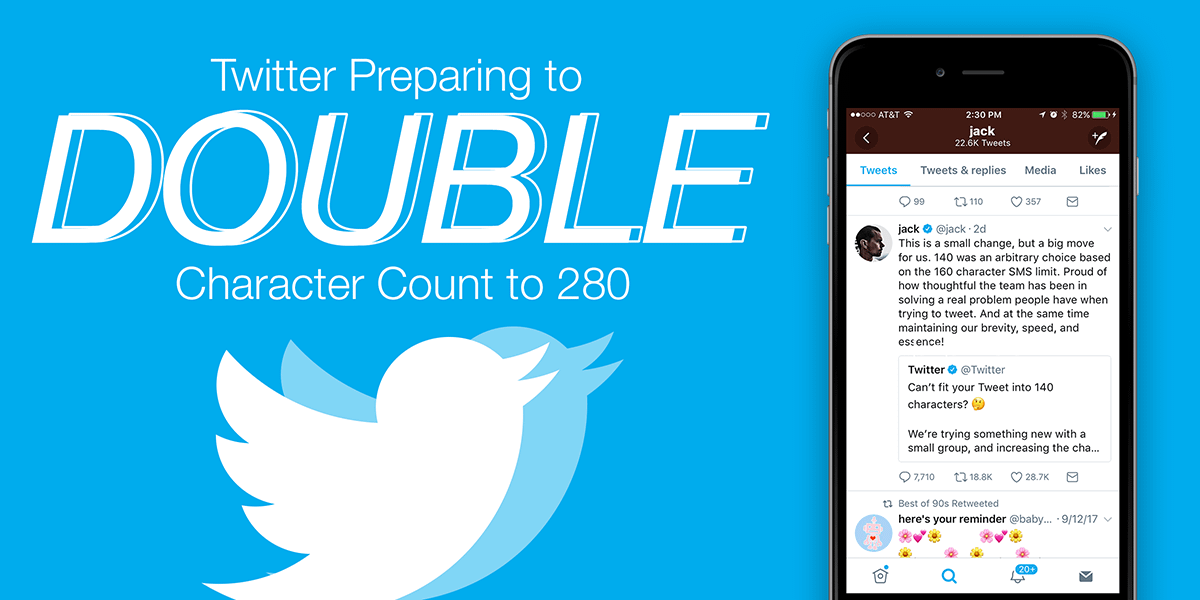 Yesterday, Twitter began testing a new 280-character count in select languages in an effort for users to become more expressive. In a post from Twitter’s blog, Aliza Rosen articulated that the Twitter company wants users to express themselves without limitations. “Our research shows us that the character limit is a major cause of frustration for people Tweeting in English, but it is not for those Tweeting in Japanese. Also, in all markets, when people don’t have to cram their thoughts into 140 characters and actually have some to spare, we see more people Tweeting – which is awesome!”1

Twitter’s chief executive officer, Jack Dorsey tweeted “This is a small change, but a big move for us.”

Twitter’s new feature will only be available to a small group of users for now as it is still considered a test. The new feature was introduced to the fact that users, constrained to 140 characters, had difficulties when writing in certain languages such as English, Spanish, French or Portuguese compared to other languages such as Japanese, Chinese and Korean.

Will Twitter double the character count to 280? Making this adjustment to the word limit is a huge leap for this social media platform. Currently, the company has indicated that it is not officially rolling the feature out yet. Only time will tell. If they do take this course of action, many people are worried that their Twitter feeds will now become more cluttered with rants and extended long ads than short and sweet points.

Most of Twitters users and interfaces are geared towards people who want to see short posts and precise answers to questions. Character limits make it more challenging to put a lot of words into 140 characters, but also make it more simplistic to tweet or reply. Whereas if someone wants to rant about a political view, they will soon be able to clutter users feeds with up to 280 characters.

Mistakes Not to Make With Your Donors

Staying on Top of Google’s Algorithm